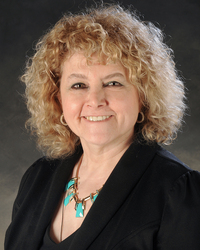 Gohar Marikyan is the 2020 recipient of the Turnab Chair in Mentoring award and the 2012 recipient of the Susan H. Turben Award for Excellence in Scholarship. She holds a Ph.D. degree in mathematics (research Ph.D. in mathematical logic) and an M.S. in computer science (research master’s degree in theory of algorithms). Dr. Marikyan continues to actively pursue her research in mathematical logic as it applies to computer science. She also is interested in the history of math education as it applies to the development of teaching methodology for building stronger mathematical foundations. The results and findings of her research have been presented at domestic and international conferences and published in a number of scientific journals. Recently Dr. Marikyan published her book “Anania Shirakatsi’s Tvabanutiun: World’s Oldest Manuscript on Arithmetic. Part 1: Addition.”To reflect advances in technology, she continues to create new studies in mathematics and computer science. Dr. Marikyan also teaches business-related mathematics and computer studies. She won the Susan H. Turben Award for Excellence in Scholarship in 2012, and in 2020 Susan H. Turben Chair in Mentoring award.

Born, brought up, and educated in Armenia, under the Soviet system, Dr. Marikyan has extensively studied the history and ideology of the Soviet Union, and was an eyewitness to its workings and its collapse. After its collapse, Dr. Marikyan was involved, firsthand, in the development, and the operation of the very first nongovernmental organizations in the Soviet Union – the Gtutiun Armenian Benevolent Union – as its information systems department head, liaison officer, and publicity director. In addition, she has taken several courses in the management and leadership of NGOs and has participated in various programs that emerged after the Soviet collapse. She was the winner of the Competition on Proposal Writing, USAID; and won a grant by the United States Information Agency’s Regional Scholar Exchange Program and Freedom Support Act Fellowship; and was invited for a three-month visit to the United States to research management and leadership of nongovernmental organizations at the Western Connecticut State University. She also is a certified teacher of religion of the Armenian Apostolic Church.