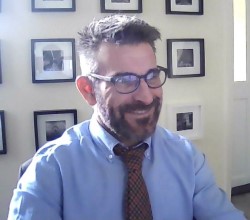 Originally from Los Angeles, California, I moved to the United Kingdom in 2012 to begin the Erasmus Mundus Joint Doctorate in Cultural & Global Criminology program at the University of Kent (School of Social Policy, Sociology & Social Research) and Universität Hamburg (Institut für Kriminologische Sozialforschung). This included attendance on the 'Advanced Qualitative and Legal Methods in Criminology' summer session at Utrecht Universiteit and participation in the Common Study Programme in Critical Criminology. Prior to completing my PhD, I completed a Bachelor of Arts in Criminal Justice at California State University at Fullerton (2010) and a Master of Science in Criminal Justice at California State University at Long Beach (2012).

In my past life ('pre-criminology'), I worked in the entertainment industry for 14 years as an executive assistant at such studios as Warner Bros., Paramount and Sony, and also as a talent agent assistant at various agencies, including the Agency for the Performing Arts, International Creative Management and Paul Kohner, Inc. I ended my career in 2002 as a talent agent with my own agency: Bliss, Frederick and Associates.

My research is unique because it applies a queered cultural criminological lens to the study of crime and crime control-related issues that impact the lived experiences of lesbian, gay, bisexual, transgender and queer (LGBTQ) individuals. Three areas in which I am research active are:

As a queered cultural criminologist, I focus largely on the (sub)cultural dynamics that underpin and or shape crime, deviance and transgression that is committed or experienced by LGBTQ men and women. For this reason, I am particularly interested in the past and present marginalization and oppression of sexual minorities -- especially where a resultant stigma is felt or perceived. I also investigate the ways in which the media and other moral entrepreneurs 'represent' LGBTQ-related crime and deviance through, for example, the perpetuation of myths and stereotypes and through the framing of moral panics. I have also recently begun to explore the emergence of what I refer to as self-mediated representations -- that is, the production of personal photo or video content by LGBTQ individuals that depicts them engaged in acts of crime, deviance, transgression or resistance and which is then posted to both public and 'members-only' cyberqueer social media sites and webcam networks.

Finally, I take a critical stance towards 'War on Drug'-led criminal justice policy and outdated (and in some cases, stigmatising) HIV/AIDS public health strategies and discourses surrounding non-normative drug- and sex-related behaviors. Instead, I advocate for drug decriminalization/legalisation and non-interventionist, non-stigmatising, 'zero-discrimination' approaches by drug and sexual health service providers.

Presently, I'm a subject matter expert (SME) on 'Meet, Marry, Murder with Michelle Trachtenberg', a  one-hour 'true crime' television series which launched on A&E's Crime+Investigation channel in the U.K. and is now airing on the True Crime Network, 'Twist' and Netflix in the U.S. The series, produced by U.K.-based FirstLookTV, investigates real-life cases of intimate partner homicide in both countries.

I'm also an SME on 'Making a Serial Killer', a new television series that profiles several North American serial killers and is presently airing on Amazon Prime and AppleTV.

Finally, I've made numerous media appearances at the local, regional and national level on topics such as American politics, the U.S. criminal justice system, the 'Dark Web', U.K. knife crime, psychopathy and the Salisbury poisonings, to name a few. I am also available for interviews or commentary on criminal justice-related issues pertaining to and/or affecting LGBTQ individuals and the LGBTQ 'community'.